How to Edit a Book: Your Ultimate 21-Part Checklist

So you want to get published?

If you want people to actually read what you’ve written, you must master the art of ferociously self-editing your book.

These days, anyone can get anything printed.

It doesn’t even have to be good. If you have the money, you can find someone who will print whatever you submit, as is.

That’s not necessarily underhanded. Almost any independent publisher would be happy to offer all the services you’re willing to pay for to make your manuscript as publishable as possible.

But you’re the boss.

So if you want them to print your unedited book in the exact form you give it to them, they’ll say, “As you wish.” And if they wont, you can easily find someone who will.

On the Other Hand

So you must separate yourself from the competition by ensuring your manuscript is the absolute best it can be.

Yes, a traditional publisher will have its own editors and proofreaders. But to get that far, your manuscript has to be better than a thousand other submissions.

And if you’re self-publishing, the only way to stand out against even more competition is by ferociously editing your own book until it’s as crisp and clean as possible.

There’s little worse than an independently published book that looks like one.

So, You Must Learn How to Edit a Book

Whether you’re going to hire an editor, or be assigned one by a traditional publisher, your responsibility is to get your book manuscript to the highest level it can be before you pass it on.

Never settle for, “That’s the best I can do; now fix it for me.”

Because sadly, if you attempt the traditional publishing route, could pour your whole life into a manuscript and get just five minutes of an editor’s time before your book is rejected.

But as one who has been on both sides of the desk for more than four decades, let me tell you there are reasons for it:

Why Publishers Reject Your Manuscript After Reading Just Two Pages

Yes, a professional editor can determine all this with a quick read of the first two to three pages.

If you find yourself saying, “But they didn’t even get to the good stuff,” then you need to put the good stuff earlier in your manuscript.

So today, I want to zero in on tight writing and self-editing.

For any writer, the ability to look at a sentence and see what’s superfluous, what can be altered, revised, expanded, or especially cut, is essential. It’s satisfying to see that sentence shrink, snap into place, and ultimately emerge in a more polished form: clear, economical, sharp.

If you’re ready to learn how to edit a book, here’s what you need to do:

The Ultimate Checklist for Editing a Book

WANT TO KEEP THESE 21 SELF-EDITING TIPS HANDY NEXT TIME YOU’RE WRITING? CLICK HERE TO GET A DOWNLOADABLE CHECKLIST WITH ALL 21 TIPS INCLUDED.

Or at least to pretend to. It’s not easy. But we writers need to listen to our editors—even if that means listening to ourselves!

This is a literary term for a story or chapter that finally begins after a page or two of scene setting and background. Get on with it.

3. Choose the normal word over the obtuse.

When you’re tempted to show off your vocabulary or a fancy turn of phrase, think reader-first and keep your content king. Don’t intrude. Get out of the way of your message.

A rule that follows its own advice. This should be the hallmark of every writer.

“She nodded her head in agreement.” Those last four words could be deleted. What else would she nod but her head? And when she nods, we need not be told she’s in agreement.

“He clapped his hands.” What else would he clap?

“She shrugged her shoulders.” What else?

“He blinked his eyes.” Same question.

“They heard the sound of a train whistle.” The sound of could be deleted.

6. Avoid the words up and down…

…unless they’re really needed. He rigged [up] the device. She sat [down] on the couch.

7. Usually delete the word that.

Use it only for clarity.

8. Give the reader credit.

Once you’ve established something, you don’t need to repeat it.

Example: “They walked through the open door and sat down across from each other in chairs.”

And avoid quotation marks around words used in another context, as if the reader wouldn’t “get it” otherwise. (Notice how subtly insulting that is.)

“She didn’t say anything.”

“The crowded room never got quiet.”

If you don’t say these things happened, we’ll assume they didn’t.

10. Avoid being an adjectival maniac.

Good writing is a thing of strong nouns and verbs, not adjectives. Use them sparingly.

Novelist and editor Sol Stein says one plus one equals one-half (1+1=1/2), meaning the power of your words is diminished by not picking just the better one. “He proved a scrappy, active fighter,” is more powerful if you settle on the stronger of those two adjectives. Less is more. Which would you choose?

“I literally died when I heard that.” R.I.P.

“My eyes literally fell out of my head.” There’s a story I’d like to read.

“I was literally climbing the walls.” You have a future in horror films.

13. Avoid too much stage direction.

You don’t need to tell every action of every character in each scene, what they’re doing with each hand, etc.

14. Maintain a single Point of View (POV) for every scene.

Failing to do so is one of the most common errors beginning writers make. Amateurs often defend themselves against this criticism by citing classics by famous authors who violated this. Times change. Readers’ tastes change. This is the rule for today, and it’s true of what sells.

And not just words and phrases. There are also clichéd situations, like starting your story with the main character waking to an alarm clock; having a character describe herself while looking in a full-length mirror; having future love interests literally bump into each other upon first meeting, etc.

Marian  pounded the table. “George, you’re going to drive me crazy,” she said.

If Marian pounds the table and chooses those words, we don’t need to be told she’s mad. If George says she can do it, we know he was encouraging.

Not: John was exhausted. He dropped onto the couch and exclaimed tiredly, “I’m beat.”

“I hate you,” Jill said, narrowing her eyes.

Not: “I hate you,” Jill blurted ferociously.

Sometimes people whisper or shout or mumble, but let your choice of words imply whether they are grumbling, etc. If it’s important that they sigh or laugh, separate the action from the dialogue:

Jim sighed. “I just can’t take any more,” he said. [Usually you can even drop the attribution he said if you have described his action first. We know who’s speaking.]

19. Specifics add the ring of truth.

Yes, even to fiction.

In fact, avoid even the same first initials.

“He…was…DEAD!” doesn’t make a character any more dramatically expired than “He was dead.”

Apply as many of these self-editing hints as possible to the first page of your work-in-progress. It’ll make a huge difference.

I’ve added a downloadable self-editing checklist below with all 21 tips included. The more boxes you can check for your manuscript, the leaner, meaner, and more ready it will be for submission to a publisher. 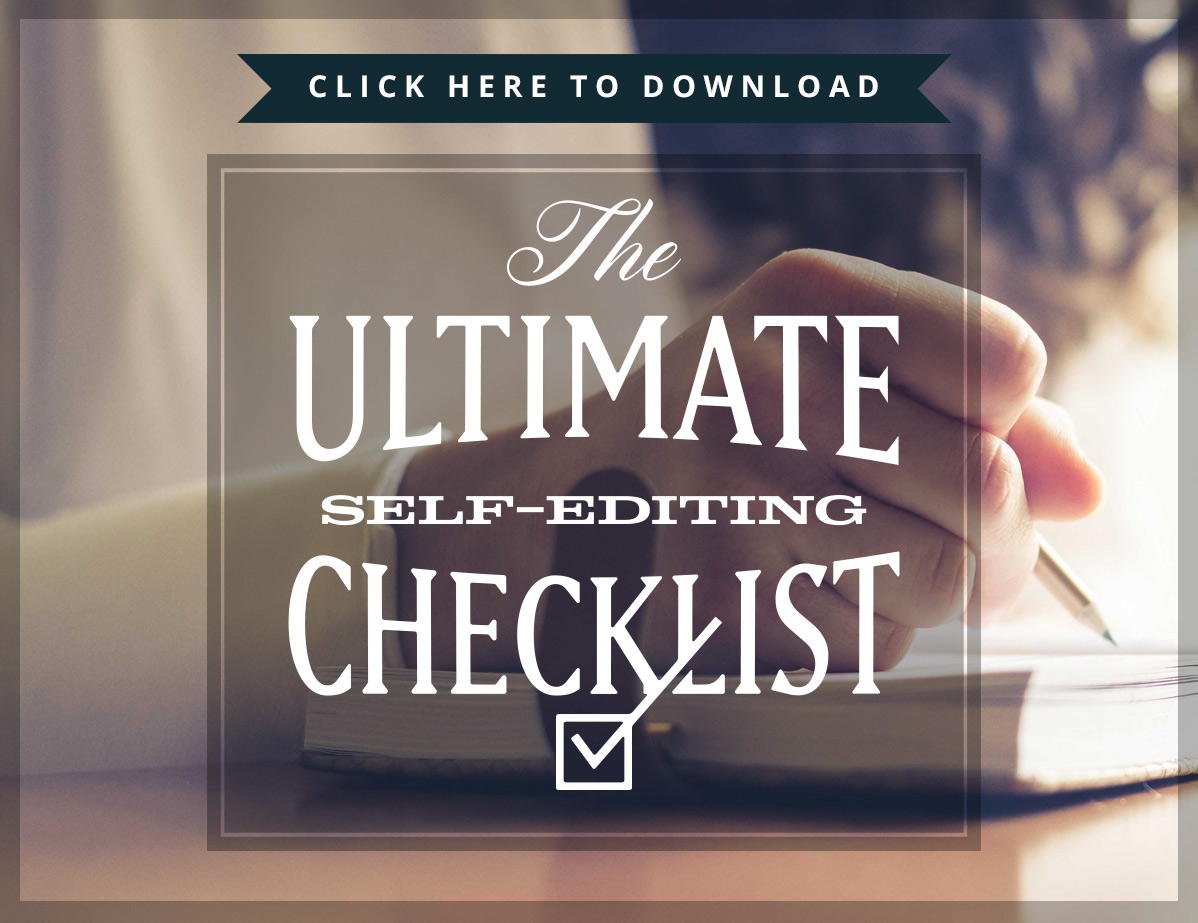 Buy me a Cup of Coffee?